It’s been five years since I, Woody Weingarten, and my granddaughter, Hannah Schifrin, close despite a 70-year difference, finished co-writing "Grampy and His Fairyzona Playmates.” But we had to wait for the marvelous full-color illustrations to be done — and 2,149 tweaks.

The fantasy, aimed hat 6 to 10-year-olds, is now available from Amazon, Apple, Barnes & Nobel and a bunch of other places. You can check out what it's all about on my new website —   http://woodyweingarten.com. 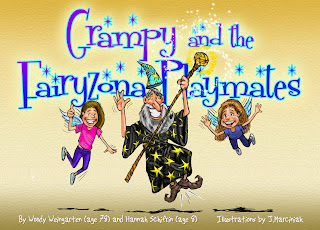 The book tells of a sorcerer who frequently must get his granddaughter Lily and her best friend Penny out of trouble when the two eight-year-old fairies mess up their magic spells.

Readers willing to let their imaginations run wild can learn about winning a division of the Unicorn Racing Championships, baby chicks that sing jazz instead of cheeping, a wizard who can make robot movie characters less scary, and two girls who want to stop “all the thunder-and-lightning storms, floods, earthquakes and tornadoes all over the planet.”

It's a fun read.
I, of course, am also the author of "Rollercoaster: How a man can survive his partner's breast cancer," a book I aimed at male caregivers.
Posted by VitalityPress at 8:11 PM No comments:

Mutations of PALB2 can raise a woman's risk of breast cancer nearly as much as better known mutations like BRCA.
According to a recent story by Susan Berger in The New York Times, doctors "are increasingly recomending that anyone who was tested before 2014 go through genetic testing again" — to look for the PALB2 gene, which also raises a patient"s chances of contracting ovarian and pancreatic cancer.
The Times article quotes Dr. Peter Hulick, medical director of the Mark R. Neaman Center for Personalized Medicine at NorthShore University HealthSystem in Evanston, Ill., as saying that "raising awareness with physicians and patients is critical, otherwise patients are getting an incomplete genetic assessment."
Earlier this year, the American College of Medical Genetics and Gonomics advised that "women with PALB2 mutations be surveilled similarly to patients with BRCA mutations, and that, depending on family history, mastectomies could be an option to reduce the risk in some patients," Berger's piece reports.
The Times article further notes that guidelines from the National Comprehensive Cancert Network, as well as the genetics organization,"suggest women with the PALB2 mutation should have breast MRIs and mammograms, alternating every six months." The guidance was based on peer-reviewed evidence by a global team of experts in cancer genetics.
Hulick also said, according to the story, that "the risk of developing breast cancer was 40 to 60 percent greater among women with the PALB2 mutation, similar to the risk from BRCA."
More informatiom about the BRCA1 and BRCA2 mutations can be found in "Rollercoaster: How a man can survive his partner's breast cancer,"
Posted by VitalityPress at 1:43 PM No comments:

Oscar-winning actor Jeff Bridges says his getting Covid made his lymph-system cancer seem like "a piece of cake."

According to recent online HuffPost story by Mary Papenfuss, Bridges — who survived has both the virus and the lymphoma, which is now in remission — thought he was "gettin' close to the pearly gates."

The 71-year-old thespian said on his handwritten blog that he contracted the coronavirus during his cancer treatments, which ultimately — and dramatically — shrunk a 9x12-inch tumor "to the size of a marble."

The pandemic, Papenfuss' article states, caused him "moments of tremendous pain" causing him to cry out  "throughout  the night."

Extra oxygen reportedly was necessary for the actor to just walk around. The HuffPost story quotes Bridges as saying the sound of reminded him "of Darth Vader."

The vaccine, he suggested, was linked to his speedy improvement, with all his treatments now being "in the rearview mirror."

Bridges, who won the best actor Oscar in 2010 for "Crazy Heart" and had been nominated for half a dozen other Academy Awards, had been hospitalized for five weeks, he wrote, because his immune system was "shot from chemo."

His wife, Susan Geston, not incidentally, also was hospitalized — although only for five days — because she contracted Covid.

Bridges was elated, he indicated, to be released in time to walk Hayley, his daughter, down the aisle for her wedding and to dance with her "without oxygen."

More information about disease treatments can be found in "Rollercoaster: How a man can survive his partner's breast cancer," a VitalityPress book that I, Woody Weingarten, aimed at male caregivers.

Posted by VitalityPress at 9:19 AM No comments: