Website publishes Woody Weingarten's fake interview with himself and his granddaughter

I was recently surprised — pleasantly — when the Local News Matters website published a make-believe interview about Grampy and His Fairyzona Playmates that I conducted with myself and my granddaughter, the fantasy’s co-authors.

Here’s a link to my shameless promotion, especially for those who enjoy a touch of whimsy or silliness: bit.ly/3pzw0xQ.

In case you've missed my earlier blog items, our kids' book, written by two people 70 years apart in age and aimed at children 6 to 10, features a sorcerer, two fairies, spells, unicorns, and a magic carpet.

Among its highlights are an eight-year-old fairy winning her division of the Unicorn Racing Championships, baby chicks singing jazz instead of cheeping, a wizard making robot movie characters less scary, and two girls wanting to stop thunder-and-lightning storms, floods, earthquakes and tornadoes all over the planet.

More information is available at my new website — woodyweingarten.com.

Incidentally, if any of you have already bought and read the book, I’d really appreciate your reviewing it on Amazon and Goodreads.

Not incidentally, even though we’re already a couple of weeks into 2022, I wish you all the happiest new year you’ve ever experienced, one crammed with whimsy (faux and real).

Posted by VitalityPress at 2:15 PM No comments:

Covid-19 apparently is responsible for many cancers dangerously advancing, physicians have warned, because the pandemic caused a large drop in screenings.

The main reason, according to a recent story in The New York Times by Reed Abelson, is that mammograms and other tests to detect potential cancers were canceled or severely delayed by lockdowns, an action that may have led to undiagnosed malignancies.
"Waves of surging Covid cases," the article says, "shuttered clinics and testing labs, or reduced hours at other places, resulting in steep declines in the number of screenings, including for breast and colorectal cancers, experts have said."
The Times piece quotes Dr. Lucio N. Gordan, president of the Florida Cancer Specialists & Research Institute, one of the country's biggest independent oncology groups, as saying that there is "no question…that we are seeing patients with more advanced" cancers.
The "fear of Covid was more tangible than the fear of missing a screen that detected cancer," reports Dr. Patrick I. Borgen, chief of surgery at Maimonides Medical Center in Brooklyn, where he also heads its breast center, the story adds.
Borgen believes healthy people "stayed away to avoid contagion," the piece notes.
And when clinics and other places reopened, it goes on, "some patients…could not easily get an appointment because of pent-up demand. Others skipped regular testing or ignored worrisome symptoms because they were afraid of getting infected or, after losing their jobs, they couldn't afford the cost of a test…even patients at high risk because of their genetic makeup or because they previously had cancer have missed critical screenings."
The Times article also quotes Dr. Barbara L. McAneny, past president of the American Medical Association and chief exec of New Mexico Oncology Hematology Consultants, many of whose patients stayed away, even if they did have insurance, because they couldn't afford the deductibles or co-pays.
"We know cancers are out there," she reportedly says. "We're seeing that, particularly with our poorer folks who are living on the edge anyway, living paycheck to paycheck."
More information about screenings can be found in "Rollercoaster: How a man can survive his partner's breast cancer," a VitalityPress book that I, Woody Weingarten, aimed at male caregivers.
Posted by VitalityPress at 1:11 PM No comments:

A story in last week's Pacific Sun and North Bay Bohemian calls Grampy and His Fairyzona Playmates “perhaps the sweetest kids’ book of the year-end possibly the decade.” The article by Jane Vick includes a reproduction of the cover, with a caption headlined “Multigenerational Magic,” and predicts that the fantasy “is sure to become a childhood classic.” 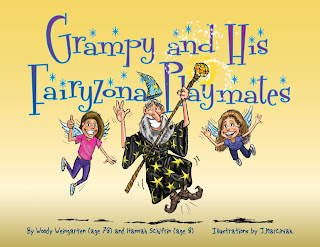 The plug by the Marin and Sonoma County weeklies, one traffic jam north of the Golden Gate Bridge, ensures that my co-writing granddaughter, our illustrator and I have a happy new year.
You can check it all out at https://pacificsun.com/literary-roundup-phenomenal-reads-for-2022/ or get more information from my website — woodyweingarten.com.
My granddaughter and I, close despite a 70-year difference, had oodles of fun collaborating on the whimsical book, which features a sorcerer, two fairies, spells, unicorns and a magic carpet. Highlights include an eight-year-old fairy winning her division of the Unicorn Racing Championships, baby chicks singing jazz instead of cheeping, a wizard making robot movie characters less scary, and two girls wanting to stop thunder-and-lightning storms, floods, earthquakes and tornadoes all over the planet.
Not incidentally, the front of Grampy…, created by Joe Marciniak, was recently voted best 2021 children’s book cover design by the Bay Area Independent Publishers Association (BAIPA).
For any of you who’ve already purchased the book and liked it, we’d love you to spread the word — via reviews on Amazon and GoodReads, via personal posts on Facebook or other social media (or sharing), via anything you figure can help the get the fantasy into the hands of more children 6 to 10.
I, Woody Weingarten, have also written a book that can be helpful for patients who are facing a life-threatening disease and their caregivers (male or female) — Rollercoaster: How a man can survive his partner's breast cancer.
Posted by VitalityPress at 12:01 PM No comments: