Look for 'Grampy and His Fairzona Playmates' 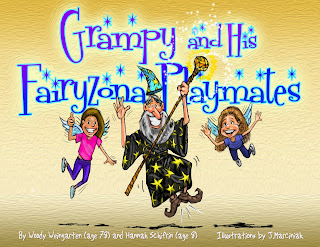 OK, I admit that the coronavirus has greatly disrupted my life.

And my octogenarian wife's.

It's forced us into a real retirement: There are no plays or concerts or museum openings for me to review; there's no weekly support group for me to run (where I normally help men whose partners have or had breast cancer or some other life-threatening disease); there are no performances in senior facilities where my wife, Nancy Fox, can skillfully do her "Piano and Patter" shows.

Yes, the bug is keeping us isolated at home, visitor-less, turning almost everything we do into a virtual reality. But, wonder of wonders, it's also allowing us to clean closets and drawers that have been accumulating crapola (and dust) for decades.

The spread of the virus, however, is also delaying publication of "Grampy and His Fairyzona Playmates."

That's my new VitalityPress book, a children's fairytale co-written with my granddaughter, Hannah Schifrin, and illustrated by a talented artist, Joe Marciniak.

When it'll come out is now a huge question-mark. Watch this space, as publicists are wont to say: I'll let you know when it all becomes tangible.

In the meantime, of course, you can purchase my first book, "Rollercoaster: How to survive your partner's breast cancer," through Amazon or through your local bookstore (if it's still open).
Posted by VitalityPress at 5:34 PM No comments:

Plutonium pickup is basis of lawsuit against govt.


Cash settlements, even in cases of class-action suits, may be too little, too late.

Witness a lawsuit filed by Victor Skaar, a veteran, alleging "that he and hundreds of other vets were exposed to radiation in the service (in Palomares, Spain), which the Air Force has denied for decades."

The suit's aim is to get the U.S. government to pay for the victims' medical care.

According to a recent story by Dave Phillips in The New York Times, Skaar, an 83-year-old retired chief master sergeant, "was one of 1,600 troops scrambled by the Air Force in 1966 to clean up a classified nuclear disaster by collecting debris and shoveling up plutonium-laced soil."

In January of that year, an American B-52 bomber on a Cold War patrol exploded during a midair refueling accident that sent four hydrogen bombs hurtling toward the ground. Though they didn't detonate, because they weren't armed, "conventional explosives in two of the bombs blew up on impact, scattering pulverized plutonium over a patchwork of farm fields and stucco houses."

When many contracted cancer and other ailments later, the federal government denied responsibility and refused to pay for their medical care — not unlike what happened with Agent Orange in the Vietnam War era.

Skaar's class-action suit was filed against the Department of Veterans Affairs.

Upon being discharged in 1982, Skaar had found his white blood cell count "way off," Phillips' story says. He's been fighting ever since.

"First," the plaintiff notes, they told me there were no records, which I knew was a lie because I helped to make them."

Officials admitted he'd been exposed but claimed "the levels were so low it didn't matter."

During the cleanup, in fact, he had jotted on a hand-drawn map where there had been high-radiation readings.

Through a Freedom of Information Act request in 1992, he'd obtained a list of 26 airmen — including himself — who'd tested high.

His suit was aided by a veterans' services clinic run by students at Yale Law School.

"The bunk science the Air Force was using was not just harming Mr. Skaar, but all the other Palomares veterans," Phillips quoted Meghan Brooks, a clinic member who has since graduated. "Mr. Skaar really wanted to fight on behalf of others."

The Times quotes Skaar as saying, "I want to go to my grave knowing I've done the best I could."

More information on lawsuits about cancer can be found in "Rollercoaster: How a man can survive his partner's breast cancer," a VitalityPress book that I, Woody Weingarten, aimed at male caregivers.

Posted by VitalityPress at 2:52 PM No comments: