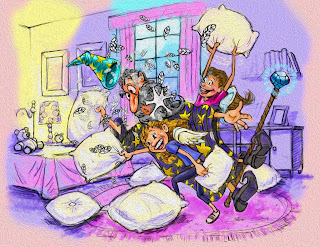 'Grampy and His Fairyzona Playmates,' a children's fantasy co-authored by me (Woody Weingarten) and my granddaughter, Hannah Schifrin, is definitely ready for prime time.

To embellish the VitalityPress book's publication (tentatively slated for New Year's Day 2021), I'm developing a new, modernized website that will allow readers to more readily access more information more quickly and more visually.
The exact date of the refreshed site's launch has yet to be determined but, as the cliche goes, you'll be the first to know. Meanwhile, just keep on checking here.

'Grampy and His Fairyzona Playmates,' five years in the making, is aimed at readers between the ages of 6 and 10. It's a four-part story of how a sorcerer, Grandpa Graybeard, repeatedly gets his granddaughter, Lily, and her best friend, Penny, out of trouble after they mess up their magic spells. It also shows how the girls learn from their misadventures.
Hannah Schifrin was only eight years old when she collaborated on the book, which is illustrated by Joe Marciniak in full color.
While you're waiting for 'Grampy' to be published, if you want to make sure I can put one word after another, check out your local bookstore or Amazon and get a copy of "Rollercoaster: How a man can survive his partner's breast cancer," a VitalityPress volume I aimed at male caregivers.
And look for, somewhere in mid-2021, for "The Roving I," a compilation of columns I'd written for a group of weekly newspapers over an 11-year period.
Posted by VitalityPress at 1:20 PM No comments:

An aggressive new therapy that attacks an especially perilous early-stage breast cancer is ready for use on patients.

That, at least, is what's cited in an October-November AARP Magazine story regarding a type of cancer known as HER2+ER+.

The multi-disciplinary therapy was first proven beneficial in later stages of the disease, says the piece.

The article also notes that "about a quarter of all breast cancers are HER2+" — tumors that have "higher levels of a protein called human epidermal growth factor receptor 2, which tends to make them grow and spread faster than other kinds of breast cancer."

Dr. Vered Stearns, director of the women's malignancies program at the Kimmel Cancer Center at Johns Hopkins University in Baltimore, is quoted by the magazine as saying that new treatments that specifically target HER2 can now expected to be utilized in fighting the disease.
Accompanying the AARP Magazine article are two noteworthy short sidebars:
• "Aromatase inhibitors (which reduce estrogen), used to prevent recurrence, may prevent breast cancer from developing in the first place."
• "An immunotherapy drug, atezolizumab, is being tested in combination with chemotherapy as a new line of treatment for hard-to-treat triple-negative cancers."
More information about other treatments and drugs can be found in "Rollercoaster: How a man can survive his partner's breast cancer," a VitalityPress book that I, Woody Weingarten, aimed at male caregivers.
Posted by VitalityPress at 7:24 AM No comments: