The California Supreme Court has turned down both defendant and plaintiff appeals in a case where a jury decided the weed-killer Roundup was the reason the defendant contracted cancer.

A story by Bob Egelko in yesterday's San Francisco Chronicle explains that the court denied Monsanto's appeal of a "groundbreaking verdict that found the company's widely used herbicide caused a school groundskeeper's cancer and that the company disregarded public safety in marketing its product."

Simultaneously, however, it rejected a review of the plaintiff's appeal of a lower-court ruling that reduced his damages from $78.5 million to $21.5 million.
The case had been the first in the United States to go to trial among many thousands filed against the giant agribusiness now owned by Bayer, which paid $63 billion for it in 2018. Cancer victims maintain that the problem is glyphosate, the active ingredient in Roundup and a more concentrated version called Ranger Pro.
The plaintiff in the groundbreaking case, Dewayne Johnson, had developed non-Hodgkin's lymphoma, a blood cancer, after using the Ranger Pro from two to three hours a day over a four-year period as a groundskeeper and pest-control manager for the Benicia School District. At the time of the 2018 trial, lesions covered his body.
The Vallejo resident testified, Egelko's story says, that "he wore protective clothing but couldn't fully protect his face from wind-blown spray, and twice was drenched with herbicide sprays from a detached hose and a leaking container."
According to the Chronicle article, the jury determined that Monsanto "should have known the product was carcinogenic, and 'acted with malice or oppression' by failing to notify Johnson's employer."
Bayer has indicated it may consider further review of Wednesday's rulings, which most likely would mean seeking a federal court judgment. The company has previously said it would pay nearly $10 billion to upwards of 125,000 claimants, as well as setting aside another billion for potential future plaintiffs. Those settlements, announced in June, haven't yet been finalized and, in fact, have been challenged by some plaintiffs' lawyers.
Information on other suits against manufacturers can be found in "Rollercoaster: How a man can survive his partner's breast cancer," a VitalityPress book that I, Woody Weingarten, aimed at male caregivers.
Posted by VitalityPress at 1:55 PM No comments:

Hooray! A tentative publication date, Jan. 1, has been established for 'Grampy and His Fairyzona Playmates.'
The 50-page children's book, a true collaboration of me, Woody Weingarten, and my granddaughter, Hannah Schifrin, has been — as Hollywood publicists often shout — "five years in the making."
Surprisingly, perhaps, recent delays weren't caused by Covid-19 but by our desire to make the book the best possible available for readers between the ages of 6 and 10. 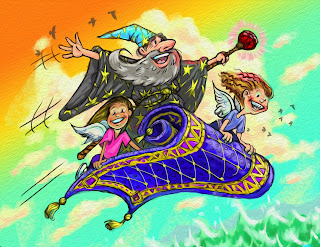 A four-part fantasy, 'Grampy and His Fairyzona Playmates' focuses on how a sorcerer, Grandpa Graybeard, repeatedly gets his granddaughter, Lily, and her best friend, Penny, out of trouble after they mess up their magic spells. It also shows how the girls learn from their misadventures.

Hannah was only eight years old when she co-wrote the book, which is colorfully illustrated by Joe Marciniak.
While you're waiting, for anybody who wants to see first-hand that I can put one word after another, why not check out your local bookstore or Amazon and get a copy of "Rollercoaster: How a man can survive his partner's breast cancer," a VitalityPress volume I aimed at male caregivers (one, admittedly, that I'm considering updating).
And look, probably in mid-2021, for "The Roving I," a compilation of columns I'd written for a group of weekly newspapers over an 11-year period.
Posted by VitalityPress at 8:29 PM No comments:

Double mastectomies gain favor as ratio of 1 in 8 U.S. women getting breast cancer remains the same


Women with cancer in a single breast are increasingly opting to remove both — prophylactically.

Reporting by Alexandra Sifferlin in a Time magazine story cites a study of 5,080 women with early stage breast cancer published in JAMA Surgery to the effect that a 20% increase is being driven in part by the patients' surgeons. The study, which considered women who had an average risk for cancer in the second breast, also surveyed 377 of the patients' surgeons.

Although the doctors — who generally did recommend a double mastectomy for patients at high risk — initially leaned toward breast-conserving surgery for average-risk patients rather than CPM, or contralateral prophylactic mastectomy, they were apt to change their minds, the story says.

"To give patients peace of mind" and to "avoid patient conflict" — rather than "to reduce recurrence or improve survival."

Women whose surgeons were among those most reluctant to perform a double mastectomy "had only a 4% chance" of having one, the study showed, while the likelihood of women whose doctors were most open to getting CPM having both breasts removed was 34%.
Sifferlin's story quotes Dr. Steven Katz, prof at the School of Public Health at the University of Michigan, as saying, "The emotional reactions to cancer frequently prime patients to desire the most aggressive approach. Our results underscore that most surgeons today favor less aggressive approaches to surgery, and it's challenging for them to communicate with their patients that bigger is not better."

The Time article also says that Katz's earlier research "found that a woman's fear about cancer recurrence or her desire to avoid regret can also lead to a decision between her and her doctor to choose more aggressive surgery."

Katz suggests women should consider getting a second opinion, although 95% of breast-cancer patients are treated by the first physician they see.

In a companion Time story that acts as an introduction to Sifferlin's, Alice Park notes that "women now have more information about their disease — down to the very DNA of their tumors — than ever before, so they can make more informed decisions about how aggressively they want to be treated."

She further writes that "scientists also have an evolving understanding of how women can better endure treatment with fewer side effects — and they have plenty of options to do so, from getting more sleep to practicing yoga or eating healthfully."

In addition, Park contends, "women are becoming empowered to make better decisions, and research is even revealing what they should know about the potential biases of the doctors who treat them."

More information about choices of treatment can be obtained by reading "Rollercoaster: How a man can survive his partner's breast cancer," a VitalityPress book that I, Woody Weingarten, aimed at male caregivers.
Posted by VitalityPress at 3:13 PM No comments: