Jamie B. Raskin, a key member of the House Select Committee that investigated the Jan. 6, 2021, attack on the Capitol, is again fighting cancer.

The 60-year-old Democrat Congressman from Maryland, who'd also led the second impeachment trial of President Donald Trump, announced yesterday that he is being treated for lymphoma.

According to a story by Steve Thompson in The Washington Post, Raskin reported that “after several days of tests, I have been diagnosed with Diffuse Large B Cell Lymphoma, which is a serious but curable form of cancer. Prognosis for most people in my situation is excellent after four months of treatment.”

Raskin, who won reelection last month with more than 80% of the vote, said he expects to work during the outpatient treatment of chemo-immunotherapy — though physicians have cautioned him "to reduce unnecessary exposure to the coronavirus, the flu and other viruses."

Thompson's story quotes him from a press release, joking, "“I am advised that [the treatment] also causes hair loss and weight gain (although I am still holding out hope for the kind that causes hair gain and weight loss).”

Raskin has battled cancer before. Radiation and chemo helped him in 2010 get rid of Stage 3 colon cancer.
In the final session of the select committee, Raskin was the one who voiced the committee's referral of four criminal charges against Trump to the Department of Justice.

More information about life-threatening diseases and treatments can be found in Rollercoaster: How a man can survive his partner's breast cancer, a VitalityPress book that I, Woody Weingarten, aimed at male caregivers.
Posted by VitalityPress at 12:19 PM No comments:

A new study indicates that, despite a drop, cancer deaths in Black people remain higher than those of every other category.

Lindsey Tanner's recent Associated Press story notes that the death rates among Blacks have steadily declined — as they have for all Americans for the past two decades — apparently because of lower smoking rates and advances in early detection and treatment.

But the continued high rates among Blacks remain a concern.

Those rates, according to the AP article that quotes National Cancer Institute researcher Wayne Lawrence, who led the study published online in "JAMA Oncology," likely reflect "social and economic disparities including poverty, less access to care and mistrust of doctors."

Carla Williams, a Ph.D. and a Howard University expert in cancer-related health disparities, who had no role in the research, also was quote regarding the finding: "It's showing that we simply can't rely on medical care as a way to address and eliminate the disparities."

Tanner's article also says "an earlier report from the American Cancer Society found the racial gap was narrowing mostly because of a bigger decline" in smoking. The largest dips, it postulates, "were in lung cancer among Black men and stomach cancer in Black women."

The rates, however, are "almost double the lowest rate in Asian Americans and Pacific Islanders."
Cancer prevention expert Dr. Otis Brawley of Johns Hopkins University is quoted by the the story as saying, "Other data show Black Americans get worse cancer care than White people. That's in part because they're more likely to be treated at hospitals with overworked doctors and fewer resources, and less likely to have a college degree."

Why the emphasis on a college degree? Because, the AP story quotes Brawley again, "evidence suggests that people with college degrees are more likely to exercise, not be obese, and to seek medical care when they notice changes that could signal cancer."'

More information about racial inequities and disease can be found in "Rollercoaster: How a man can survive his partner's breast cancer," a VitalityPress book that I, Woody Weingarten,  aimed at male caregivers.

Posted by VitalityPress at 7:10 AM No comments:

Button, button, who's got the button? Read this for the answer, and learn about 3 readable books

‘Tis the season in which folks often focus on family and friends. 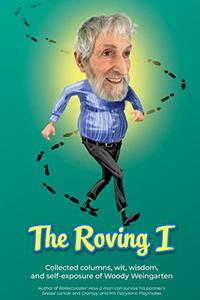 The Roving I, a mostly light-hearted book that was just released, does just that — focus on family and friends. But its 70 first-person columns also include some that feature serious stuff, and numerous humorous others that showcase overheard conversational tidbits and one-liners.

Sounds like a perfect holiday gift to me, and it’s not too late to order one (or two, or more). I have a vested interest, of course, since I cherry-picked the essays from an archive of many more that I, Woody Weingarten, wrote over more than a dozen years.

Highlights, among other recollections in the collection, are an amusing tale about my pre-wife earning a slot in my Little Black Book, an upbeat story of a friend turning Parkinson’s Disease into an asset, an awesome family drama about a woman carrying her sister’s “miracle baby” inside her for five months, an inspirational adventure about a Cambodian slave-labor camp escapee becoming a successful U.S. entrepreneur, and a peek at legendary comic Robin Williams transforming himself into a talking vagina.

Button, button, who’s got the button? That’s a refrain from my childhood (not mentioned in the book), but it certainly resonates today. Chanukah’s not over yet, and Christmas is in the offing. So, check out my website — http://woodyweingarten.com — and push the appropriate buy-button to purchase The Roving I. 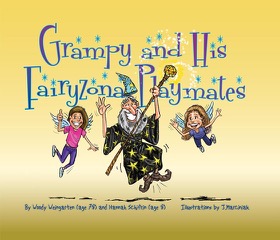 Or push one for Grampy and His Fairyzona Playmates, a whimsical fantasy co-written by my 8-year-old granddaughter and aimed at 6- to 10-year-olds. Or Rollercoaster: How a man can survive his partner’s breast cancer, which details how my partner and I learned to cope, and which can benefit anyone who knows someone with any life-threatening disease. 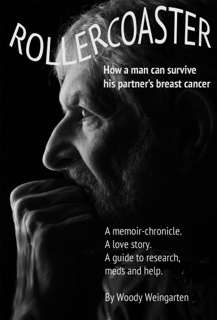 It's easy to find what my website labels fantasy, facts, and florilegium (an opaque, unfamiliar word meaning collection). Just go to http://woodyweingarten.com  and select your favorite book outlet.
Posted by VitalityPress at 1:05 AM No comments:

The study, according to a story by Lenny Bernstein this week in The Washington Post, shows that the vaccine from Moderna performed well when used alongside an immunotherapy drug developed by Merck.
Bernstein's article contends that "for the first time, messenger RNA technology — the advance that undergirds the most commonly used coronavirus vaccines — has been shown effective against a deadly form of skin cancer, when used in conjunction with" the Merck drug, pembrolizumab, which is marketed as Keytruda.
A cautionary note: The study, which involved 57 patients with Stage 3 or 4 melanoma that had spread to a lymph node and who faced a high risk of recurrence, was sponsored by the two drug companies.
The trial showed patients seeing a 44% reduction in the risk of recurrence or death compared to those who used only Keytruda.
Stéphane Bancel, Moderna's chief executive, is quoted as saying that the findings "are highly encouraging…mRNA has been transformative for COVID-19, and now, for the first time ever, we have demonstrated the potential for mRNA to have an impact on outcomes in a randomized clinical trial in melanoma."
Frances S. Collins, ex-director of the National Institutes of Health, said recently that the development of vaccines for cancer using mRNA may be one of the great medical advances to come out of the pandemic, the Post story states.
"Cancer vaccines have had a lot of promise," it quotes him as saying, "but they have been really not quite taking hold because the cycle time was just too long…Now with mRNAs, you can do that so much more quickly."
It should be noted that no mRNA cancer vaccine has yet been approved by the Food and Drug Administration.
According to the Centers for Disease Control and Prevention, the story concludes, in 2018, the last year for which figures are available, "83,996 people were diagnosed with melanoma in the United States and 8,199 died."
Information on other clinical trials can be found in Rollercoaster: How a man can survive his partner's breast cancer, a VitalityPress book that I, Woody Weingarten, aimed at male caregivers.
Posted by VitalityPress at 4:52 PM No comments:

The Roving I can be a holiday gift for you, your family, and your friends — and that purchase can also act as a present of sorts for me, its author, since it coincides with my 85th birthday.
The new anthology — available in hardcover, paperback, and ebook versions — delivers what its subtitle promises, to supply "the wit, wisdom, and self-exposure of Woody Weingarten." Inside are 70 of my favorite columns, including those about my wife earning a slot in my Little Black Book, a woman carrying her sister's "miracle baby" inside her for nine months, and Robin Williams transforming himself into a talking vagina.
Another good present — for your kids or grandkids — would be Grampy and His Fairyzona Playmates, a whimsical fantasy co-written by my 8-year-old granddaughter and aimed at 6- to 10-year-olds.
A this gift book can benefit anyone who knows someone with a life-threatening disease, Rollercoaster: How a man can survive his partner's breast cancer, which details how my wife and I learned to cope.
More information about all three can be found at my new website, woodyweingarten.com.
Posted by VitalityPress at 10:25 AM No comments: