Flip-flops in breast cancer research date back almost as far as research in breast cancer itself. They resemble my reference in "Rollercoaster: How a man can survive his partner's breast cancer" to the medical profession forever changing its mind on breast and bottle feeding.

Anyway, it seems the latest study says there's a benefit to more extensive — rather than less — breast cancer surgery, to ensure margins being clear.

According to a recent Associated Press story by Marilynn Marchionne, cavity shaving (which means "routinely removing an extra thin slice all around the margins," the areas surrounding the place the cancer was found) is a way of lowering the risk by 50 percent of women requiring a second surgery.

The article indicates that the study "could change care for more than 100,000 women in the United States alone each year."

It quotes the study's leader, Dr. Anees Chagpar of the Yale Cancer Center, as saying, "When you think about the emotional impact, let alone the economic impact, of those second surgeries, that's a big deal."

The new findings were disclosed in a study discussed at an American Society of Clinical Oncology meeting in Chicago and published online by the New England Journal of Medicine.

Currently, between 20 and 50 percent of women wind up with positive margins and need additional surgeries.

But cancer specialists for a long time have sworn by the concept of taking the least amount of tissue possible.

Flip-flop, anyone?
Posted by VitalityPress at 10:10 AM No comments:

If you're done gawking, check out 'Rollercoaster'

This won't inform you about chocolate, Dr. Sheldon Cooper's brain or Miley Cyrus' butt, but…

This blog item is a total tease.

So are its accompanying photos, which I, Woody Weingarten, carefully selected to snag your attention.

It's not, although you might prefer to focus on what's pictured below — about chocolate.

It's not about twerking, either.

Or about "The Big Bang Theory."

It's not even about the sexual predators on "Law & Order, Special Victims Unit" or about whether the San Francisco Giants can be World Series winners again this fall — or next — or whether the 49ers will will another game at all.


Its sole purpose is to get you to click on the link to "Rollercoaster: How a man can survive his partner's breast cancer," my book about male caregiving.

And then, I hope, to buy a paperback, ebook or hardcover version.

"Rollercoaster," just to boost your information quotient, is a memoir-chronicle, a love story, and an up-to-the-inute guide to research, meds and where to get help.

It illustrates that most couples can successfully deal with breast cancer, "slash, poison and burn" treatments, fear, and the repercussions of it all — and that there truly can be light at the end of the tunnel.

Although the emphasis of "Rollercoaster" is on breast cancer, any caregiver — particular those who are there for patients with AIDs, Alzheimer's or a life-threatening disease — can benefit from the book.

It's available at most bookstores (just tell 'em Ingram distributes it) — or Amazon.

If you want to check out some recent media attention given to "Rollercoaster," try the "Ten Percent" cable TV show, a short KCBS interview or an Examiner.com piece.

I'm counting on you to help me help those guys who feel overwhelmed by what they and their partners are facing.

Posted by VitalityPress at 3:28 PM No comments: 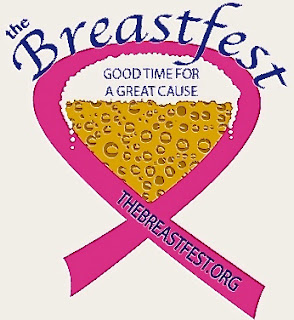 Not exactly a combination that slips into a comfy mental corner or trickles off the tongue  easily.

But it’s an important combo, especially since an all-volunteer Breastfest tomorrow will provide, according to Marin County's website, “endless eats and bottomless cups.”

It’ll be the 15th year for the benefit event, which will take place from noon to 4 p.m. at the Marin County Fairgrounds (after a few years at Fort Mason in San Francisco).

Jenn Procopio, who co-founded the festival in 2000 at what was then called the Larkspur Landing shopping center and is now known as the Marin Country Mart, reports that 100 percent of the proceeds will benefit the nonprofit Charlotte Maxwell Complementary Clinic.

The clinic’s core mission, according to its online information, “is to provide relief from the terrible side effects of cancer and its treatments (pain, nausea, fatigue and loss of appetite), to enhance immune function, and to better the quality of life for women battling cancer.”

Besides, in effect, leveling the playing field.

Low-income U.S. women, adds the clinic's website, “are four times more likely to die from their form of cancer than those living above the federal poverty line.”

Tomorrow’s festival, which includes 38 microbreweries that will be pouring samples, should push the donation total past the half-million dollar mark.

Live entertainment will be provided by Kingsborough, a Santa Rosa rock band.

The clinic, with one office in Oakland and another in San Francisco, acts as a safety net and provides free alternative-medicine treatments and other services for poor women with cancer.

Its treatments include Chinese and Western herbs, massage and nutritional therapies, guided imagery,  acupuncture, and homeopathy in general.

Procopio, general manager at Marin Brewing Company, got involved with Breastfest (whose admission is $55 in advance, $65 at the ticket booth), when her mom was fighting breast cancer and she discovered that health plans only rarely covered alternative treatments for side effects.

I, Woody Weingarten, clearly remember my wife’s immersion in alternative treatments — as well as traditional Western medicine — when she had breast cancer.

The truth is, she’s still using the same Chinese herbs that first were prescribed 20 years ago.

Her story, and mine as prime caregiver, are contained in my new VitalityPress book, “Rollercoaster: How a man can survive his partner’s breast cancer.”
Posted by VitalityPress at 3:29 PM No comments:


San Francisco's KPIX-TV turned a cliché on its head a short while back, so the new chestnut became "The early bird catches…the Woody."

How'd that happen?
Well, you see, it occurred because I, Woody Weingarten, was interviewed on the station's weekly program, "Mosaic," which airs when only bigwigs and insomniacs watch — at 5 o'clock in the morning on Sundays.

For those who are keeping score, I readily admit that Rose's much prettier than I am, and her native South African accent is much more alluring and ear-catching than my New Yawk intonations.

But we both come off well, I believe.

Actually, I think this is the best interview I've done so far, most likely due to Eric's soft but evocative questioning — aided by my perception that he was a perfect on-air audience, too, truly invested in learning more about the subject.

The most comprehensive quickie course about male caregiving, of course, is to read my new VitalityPress book, "Rollercoaster: How a man can survive his partner's breast cancer."
Posted by VitalityPress at 8:24 PM No comments:

Guides can be useful, especially for underserved


Are navigators — those nurses or lay aides who guide cancer patients through the bureaucratic mazes that must be negotiated again and again in the medical system — really valuable?

Well, research findings are contradictory, according to a July 3, 2015 Washington Post article by Lenny Bernstein.

The Post piece cites, for example, a recent study conducted at the University of Alabama at Birmingham that looked at 6,743 cancer patients (aided by 42 lay navigators) covered by Medicare in five southeastern states.

Researchers found, according to the Post, "that the number of hospitalizations, emergency room visits and admissions to intensive care declined more sharply among people assisted by navigators, as did costs."


Systems are proliferating around the country in which such guides sometimes serve as patient helpers, sometimes patient advocates.

Navigators, in effect, have become trendy.


But the Post also referred to an earlier study. That one, it said, showed only moderate benefits at best, and only after 90 days — except in cases involving what the lead researcher labeled "underserved patients who typically 'fell through the cracks' of the medical system."


In conjunction with those findings, the Post said "the debate over effectiveness and costs [centered on] the National Cancer Institute's $30.3 million, nine-site study of patient navigation. With smaller studies showing promise, the agency [had] hired and trained navigators to help 10,521 people with signs of breast, cervical, colorectal or prostate cancer…Most were minorities, had no insurance or were covered by government programs."

But the Post also quoted a Seattle cancer center researcher, Dr. Scott Ramsey, who'd examined the cost-effectiveness question and who said navigators exist because "the cancer community has done a very poor job of helping patients through the system."

The fact "that navigation exists," he added, "is kind of an indictment of the cancer-care system."

Looking at studies whose findings contradict each other is something I, Woody Weingarten, have done in "Rollercoaster: How a man can survive his partner's breast cancer," a book aimed at male caregivers.

I believe it's worth checking out.
Posted by VitalityPress at 11:37 AM No comments:

Six years ago, the U.S. Preventive Services Task Force kickstarted a debate on what precise age women should get mammograms.

By making integral to its report the notion that those under 50 should consider not doing the screenings.

The task force recently revisited its recommendations regarding breast cancer testings — and added a segment on 3-D mammography.

But its basic findings are unchanged.

It still suggests women 50 to 74 get a screening every two years, and that women 40 to 49, after consultation with their physicians, decide on their own.

The task force's recommendations come in direct conflict with the American Cancer Society, which urges all women to have yearly mammograms beginning at age 40.

Some of the cancer industry's conflicts and flip-flopping are detailed in a new VitalityPress book I, Woody Weingarten, wrote: "Rollercoaster: How a man can survive his partner's breast cancer."
Posted by VitalityPress at 11:26 AM No comments: