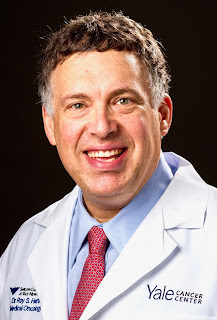 A new immune-boosting drug may help patients and doctors before lung cancer operations.

According to last week's Associated Press story by Marilynn Marchione, physicians have reported that the drug, Opdivo, "gave dramatic results when used with chemotherapy before surgery in patients with operable lung tumors."

The article says a study of 350 patients showed 25% of them given the Bristol Myers Squibb drug and chemo "had no signs of cancer remaining" after their operations.

Marchione quotes Dr. Roy Herbst, a lung specialist at the Yale Cancer Center who had no role in the study, as saying, "They open the person up and the tumor's just melted away. It's incredible."

The study's results were reported at an American Association for Cancer Research conference.

Opdivo and similar drugs called checkpoint inhibitors, the AP story indicates, "work by removing a cloak that some cancer cells have that hides them from the immune system."

Dr. Antoni Ribas, a cancer special at the University of California, Los Angeles, and president of the group sponsoring the conference, declared that the drug "is a great new step" for furthering the immune system's ability to attack lung cancer.

More details about recent research can be found in "Rollercoaster: How a man can survive his partner's breast cancer," a VitalityPress book that I, Woody Weingarten, aimed at male caregivers.

Posted by VitalityPress at 9:56 AM