Fantasy, Grampy and His Fairyzona Playmates, and related website approach their launch dates

The pandemic, believe it or not, has had some positive impact.

For instance, it's given me — Woody Weingarten — plenty of time to tweak my new website, which is nearing completion and which will promote the fantasy book I co-authored with my then eight-year-old granddaughter, Hannah Schifrin. 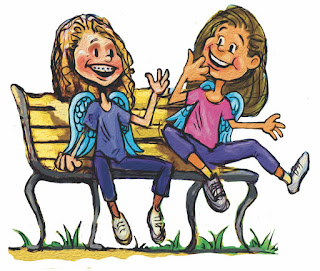 It's also given me plenty of time to tweak the magical book itself, probably ensuring that Grampy and His Fairyzona Playmates will meet its hoped-for publication date next month.

Bottom line: Both the volume itself, which is aimed at 6- to 10-year-olds, and the related website are both almost ready for prime time.

The VitalityPress book, which is illustrated in full color by Joe Marciniak, a longtime artistic pro, tells the four-part tale of a sorcerer, Grandpa Graybeard, who often has to get his granddaughter, Lily, and her best friend, Penny, out of trouble when the two eight-year-old fairies mess up their magic spells.

Their misadventures become terrific fun for all three characters — and for young readers who enjoy letting their imaginations run wild.

While proofs of Grampy and His Fairyzona Playmates are on the way to me for approval, and the finishing touches are being put on the website that can be found at woodyweingarten.com after it's launched, I'm also editing The Roving I, a book that will embrace newspaper columns I'd written over an 11-year period.

This interested in caregiving might check out, through your local bookstore or Amazon, my earlier book, Rollercoaster: How a man can survive his partner's breast cancer, a VitalityPress volume I aimed at male caregivers but one that can also aid female patients and caregivers through factual information and anecdotes. It's a comprehensive memoir-chronicle and guide to scientific research, meds and where to get help.

Though I became an expert reluctantly, I at last can unflinchingly share what I've gleaned from personal experience (including a weekly support group I've run for more than 25 years).

And that's the truth, the whole truth and nothing but the truth — no fantasy.

Posted by VitalityPress at 11:38 AM