Woody Weingarten, author of 'Rollercoaster,' will speak at benefit for Zero Breast Cancer 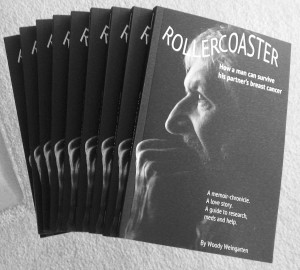 Finally, I, Woody Weingarten, have worked my way out of the primordial slime that encases a novice book author and climbed into a world of public appearances.

Next up, I will be the prime speaker at a charity event that will benefit Zero Breast Cancer, a San Rafael-based nonprofit dedicated to identifying environmental factors that may trigger the diseases.

The “Make a Point for Good” event — in support of October being Breast Cancer Awareness Month — will be held from 11am to 4pm, Saturday, Oct. 17 at the Cavallo Point store, The Mercantile.

I will be speaking at 3 p.m,. about male caregiving and my VitalityPress book, “Rollercoaster: How a man can survive his partner’s breast cancer.” A book signing will follow my talk.

Cavallo Point — which features a spa, restaurant, lodge and cooking school — plans to donate a portion of its entire month’s proceeds to ZBC. The facility is located at 601 Murray Circle, Fort Baker, in Sausalito.

Later that day, from 5:30 to 10 p.m., another benefit for Zero Breast Cancer — as well as for the To Celebrate Life foundation, a second Marin County nonprofit that helps with breast cancer research — will be held at the Marin County Jewish Community Center, 200 N. San Pedro Road, San Rafael.

That event, the 17th annual "Wine Women & Song," starts with wine, beer, cocktails and a buffet at 5:30, followed at 7 by a rock 'n' roll concert, dance party and live auction.

Featured will be music composed or made famous by artists who have battled breast cancer.

Rose Barlow, executive director of ZBC, and I previously appeared together on a weekly KPIX-TV interview show, “Mosaic,” that’s been rerun twice, most recently on Oct. 11 as another bow to the awareness month.


Anyone wanting to see two of the four segments of the ‘Mosaic” show can click on: Mosaic, and Mosaic 2 for the second half.

Earlier this month, I also spoke to about 40 members of the North Marin Breakfast Club in Novato, a men's group.

Sure, these are unpaid gigs, but protect your podiums Tony Robbins, Richard Branson and Bill Clinton, I'm slowly working up to replacing you.
Posted by VitalityPress at 9:47 AM