Hollis Walker has given my new VitalityPress book, "Rollercoaster: How a man can survive his partner's breast cancer," her stamp of approval.

To me, that's no little deal.

Because the Santa Fe author-blogger-minister has first-hand knowledge of the disease.

And she's the author of a book called "The Booby Blog: A Cancer Chronicle," which tracked her life as a breast cancer patient. My personal feeling is that if you want to look at breast cancer — or any life-threatening illness — up close from both sides of the bed, you should check out both books. 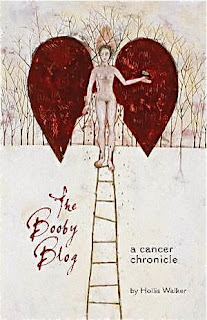 I certainly appreciate Hollis' review, and particularly liked her quoted my favorite author — me:

"Rollercoaster" is, in author Woody Weingarten’s words, “a partial memoir-chronicle, partial love story and cumulative guide to hope” written about his journey with his wife through her struggle with breast cancer.


"Rollercoaster," she added on her blog today (Jan. 26, 2015), is "an honest and vulnerable narrative" that pulls no punches.

She also labeled it "an engaging, fact-filled, intimate story that promises to be helpful to men who are accompanying a loved one through breast cancer or any life-threatening illness."

Furthermore, she said, it's "not a bad idea for the patient to read, either.

"Honestly, I was prepared to be pissed off at this book, afraid it would be a tale of one man’s woe at having to prepare his own dinners while his wife was hospitalized for a mastectomy, or perhaps more politically correct yet nevertheless self-pitying drivel.


I was happily surprised. Weingarten has written an honest and vulnerable narrative that focuses primarily on his own feelings and reactions to his wife’s illness but never loses sight of the fact that it is she who had cancer — until he gets cancer, too. Even so, he discusses his own cancer only briefly, keeping the emphasis on the story of her illness and their joint confrontation with the threat to her life.


"Writing 20 years after his wife’s diagnosis, Weingarten relies on his and his wife’s personal journals to detail the events and recall their shared but sometimes wildly different responses. Being caregiver for a wife with cancer made him 'a one-man pet-sitter, nurse, servant and counselor' overnight — all while he continued to work a full-time job. He admits to being 'fragile, persistently on the verge of tears' and says that often, 'instead of wanting to be a caregiver, I’ve wished to curl into a fetal ball and let out a bloodcurdling scream.'


"Weingarten doesn’t pull any punches about his anger with his wife’s demands at times. He unflinchingly discusses the impact of her illness on their sex life and the fact that they went to individual and couples’ counseling. Yet the two also suffered in concert. 'The illness is chewing up and spitting out our lives,' he journaled at one point, and even when things seem to be going well, 'an invisible force yanks us back into Cancerland.'


"In addition to their personal story, Weingarten offers a significant review of clinical advances in breast cancer since his wife’s illness and effects of cancer on caregivers. Throughout the book, he also discusses his participation and eventual leadership in Man-to-Man, a support group for spouses of women with breast cancer…The men provide serious emotional backup to one another, particularly when spouses die. He remains involved in the group even today, offering his experience, strength and hope to newcomers, men whose loved ones are newly diagnosed.

"The author, who is a writer and editor by profession, has written an engaging, fact-filled, intimate story that promises to be helpful to men who are accompanying a loved one through breast cancer or any life-threatening illness. (And not a bad idea for the patient to read, either.)

"And it’s [the] love story aspect of the book that lingers when the last page is turned.
Posted by VitalityPress at 7:55 PM